Artist made spray can sculptures and toys

The spray can to me is an object that transcends its proposed function as an artistic or otherwise simple utilitarian tool. Through the graffiti, street art and hip hop movements it was elevated to a symbol of occult proportions, elemental and almost godly in some respects. In the hands of the oppressed and quietened it becomes a means of expression and conveying a message that speaks in brutal and poetic volumes in the face of suppression and adversity. Through its speedy and hold-fast delivery of paint it is literally capable of visually changing the very urban passages which we as humans traverse through our daily regimented lives, its impact not just visual but also emotional and psychological. In a cynical modern world where every inch of urban infrastructure serves for the bombardment of advertising it is the equalizer in the fight for expression and wall space.

I have been drawing spray cans in a somewhat humanized / animated format since the beginning of my practice as an artist, my sketchbooks are full of spray can characters, I even have two tattooed on my body. Inspired by street art graffiti this is somewhat of a post-modernist reaction / interpretation, trying to captivate the energy and cultural weight that a spray can contains. Post-graffiti, surely, for after the paint is sprayed the paint can container remains and these works would not be possible if I didn’t have access to a large number of empty spray cans as a result of my practice as a mural and graffiti artist. 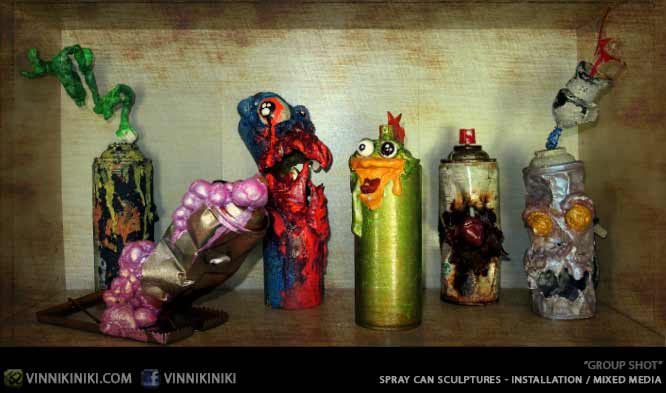 These spray-can sculpture art pieces were made by the artist using empty spray cans and a selection of other artistic materials including; spray paint, clay, glue and other found objects… The sculpture works range in style and meaning and have been grouped by the artist to fall into a few self-invented categories or ‘series’. Some of the works convey political or cultural messages whereas others simply serve as a visual aesthetic, purely ornamental (or perhaps for reasons even the artist doesn’t understand – perhaps destined for closer dissection by the viewer)…others have been designed to exist purely within the context of a gallery or other exhibition venue for which the pieces were specifically created. Some of the installation pieces contain kinetic mechanisms and rely on the surroundings both contextual and structural in order to convey their message properly, for these sculpture pieces videos of the art will be uploaded.

The list below attempts to group and explain the spray can sculptures in detail. The spray cans made by Vinni Kiniki are appreciated by a varied audience and as a result have been exhibited and sold internationally. Although it may not be the main focus of the artists output he is constantly creating these animated yet motionless pieces, whether they are set to be exhibited or sold or not, as a result his studio space reveals an army of various spray can characters and sculptures in waiting for the light of day, perhaps in a new gallery exhibition space or otherwise destined to exist somewhere.

So far the spray can sculptures fall into 3 main categories or series, please see their names in bold below along with an explanation of that given sculpture series. 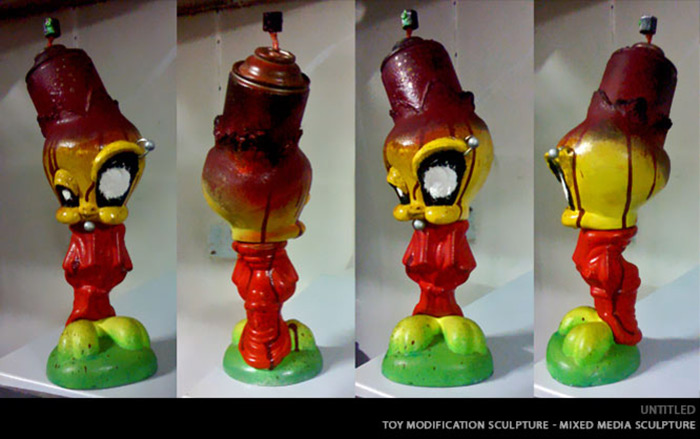 Suspended Canamation – This is a play on words of the phrase ‘suspended animation’. As the title itself may suggest this series of spray can sculpture toys made by the artist aim to depict scenarios of motion frozen into a sculptural object, always related in theme of spray cans. The sculptures aim to break the boundaries of physics, in some cases conveying a deeper meaning to be drawn by the viewer, in most cases the title of the sculpture art in question is enough to invoke and trigger the questions needed by the viewer to arrive at the meaning of the piece.

Urban Vermin – The artist Vinni Kiniki drawn parallels between everything he creates and the world around him. After expressing the theory of graffiti as a natural life form these playful sculpture creations aim to carry on from that same sentiment. The Urban Vermin is a fictitious species of hazardous life forms, undesirable, harmful species, these spray can based sculptures are created usually with the intention of being displayed or photographed in the right location to convey its sentiment. Certainly for many people graffiti is an undesirable element in our urban sprawls and the proprietor of the said element (graffiti) is the spray can. This series of spray can based sculpture works imagines spray cans are alive and able to nest amongst our habitats interacting with society.

Planet Aero-Soul – As with the other series of sculptures by the artist one of the main purposes is to give life and motion to an otherwise still object, this series or set is no different. This set of spray can sculptures are mostly the result of playful scenarios which were initially drawn and inked by the artist in a 2D drawing format, some of the drawings or cartoons lend themselves to be re-made in a physical format and these are the fictitious inhabitants, alien life forms from a planer known as “Aero-soul” (obviously a mashup of the words ‘Aerosol’ and ‘Soul’)

As an artist I enjoy using spray can sculptures as a medium to express and convey themes and emotions the same way other artists might use paint or photography. Many of the spray can sculptures I’ve made are simply a physical manifestation of an idea I had in my head, I have been drawing spray can characters long before I started creating this sculptures and perhaps this is an evolution in artistic development and creation for me.

The same way some artists might sketch an idea on paper with pen and ink i think of scenarios relying on using spray cans as a medium and foundation for creation, some of them convey deeper meanings, however some have no meaning and are purely made for fun with aesthetics being the main goal in mind. To be honest some are made with no purpose in mind at all beyond making them, if I do get to exhibit or sell them it’s a nice bonus.

My involvement with spray cans is verging on fetish and somewhat fanatical. Even before I was able to use the spray can as an artistic tool I admired its design and purpose, perhaps brainwashed by the ‘cool’ surrounding the object… Growing up I saw graffiti pieces where artists were illustrating spray cans in animated poses and personifications, I too started drawing spray can characters feverishly and even have 2 tattoos of spray cans inked on my body.

I consider the spray can to be one of the most powerful tools / images / symbols of the graffiti, street art and underground art movement. However though it may have given birth to a whole new genre of grass roots cultural artistic movements it continues to transcend and inspire new generations of artists. Conversely it also functions as a purely utilitarian device, with the ability to hold many types of fluids / liquids / compounds which are destined to be propelled by pressurised gas. It’s Yin-Yang personified, it has the ability to destroy and rebuild and so much more in-between…The very image and sound of a rattling spray can ball conjures up a whole scenarios of grass roots movements and a promise of fast and powerful artistic delivery, the empty can is as important if not more so than the substance it was propelling before it purposeful existence was spent. If the soul is paint than the can is surely the body, and one cannot exist without the other, these sculptures are somewhat of homage to that.